ANDRES INIESTA is dreaming of a Barcelona homecoming – and brutally hinted that he could replace his old teammate Xavi as soon as next year.

The legendary midfielder has spent the last four years playing in Japan at Vissel Kobe as his playing career slowly winds down.

But he and Xavi used to rule Europe at their pomp and played in what many consider to be one of the best midfields of all time during Barcelona’s hay days under Pep Guardiola.

Now 38, Iniesta is looking forward to the next stage in his footballing career.

And he has suggested that could even include replacing his old teammate as Barcelona boss.

He told Gazetta dello Sport: “I’ll continue at Vissel Kobe for another year… and then we’ll see. I would love to return to Barca. 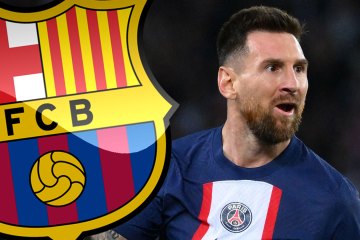 “It’s my home, but I still don’t know in what way: head coach, sports director or something like that.”

Current head coach Xavi shows no signs of departing any time soon however, with the Spanish manager appearing to have got Barcelona back on track.

They top LaLiga on goal difference ahead of rivals Real Madrid as Xavi approaches his one year anniversary as Nou Camp boss.

The club legend replaced Ronald Koeman last November and had to perform a rescue job to land Barca a place in the top four.

JOIN SUN VEGAS: GET A FREE £10 BONUS WITH 100s OF GAMES TO PLAY AND NO DEPOSIT REQUIRED (Ts&Cs apply)

But it was far from plain sailing for the coach who saw his side knocked out the Champions League group stages and face embarrassing home league losses to the likes of Cadiz, Real Betis and Rayo Vallecano.

But the club are showing clear signs of recovery following several crises, including the infamous 8-2 defeat to Bayern, the loss of club legend Lionel Messi and crippling financial issues.

If Iniesta were to return, he would be just the latest former player to take over the reigns at the Catalan club.

Along with Xavi, Koeman and Guardiola, the likes of Tito Vilanova and Luis Enrique have returned to be hired as manager over the last 15 years.

You Can Do It Messi