BARCELONA will wear a one-off kit with Drake’s OWL logo on the front against rivals Real Madrid on Sunday – and fans are not happy.

Drake was the first to surpass 50billion streams on Spotify and is being honoured as a result.

Further collaborations with other artists are likely to happen later on in the season.

The OWL will replace Spotify’s logo on the front of the jersey.

And some supporters can’t get past the likeness to Sheffield Wednesday’s iconic badge. 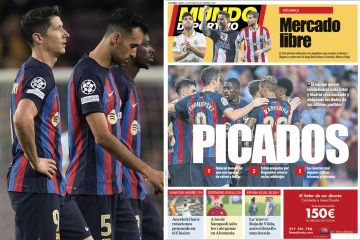 A statement read: “One of the main ideas behind the alliance between FC Barcelona and Spotify is to bring football and music together in order to connect with new audiences around the world.

“As both are capable of bringing people together and exciting fans, for the first time, the men’s football team will enter the pitch for Sunday’s Clasico wearing a jersey featuring the logo of an internationally acclaimed artist – rapper and singer Drake, winner of 4 Grammy awards and the first to surpass 50 billion streams on Spotify – rather than their main partner’s logo.

“Spotify has given this privileged space on the jersey as part of the framework of the partnership with the Club, just one of the actions that both brands are putting into place to offer innovative experiences for football fans, as well as helping to reach new audiences through music.

“As was announced when the agreement was ratified, this type of exchange on the front of the jersey is scheduled to happen more as the season progresses.”

However, fans are all saying the same thing: The Drake curse.

But should history repeat itself, the Drake curse – which has seen sports stars he’s supported immediately lose afterwards – could see Barca fall behind their rivals with defeat at the Bernabeu.

Supposed victims of the curse include Conor McGregor, Serena Williams and Anthony Joshua.

And with mood at the Camp Nou already low with the club on the verge of dropping out of the Champions League, fans don’t want superstition working against them.

Another tweeted: “Drake curse on El Clasico… are you for real?”

While others are just picturing League One side Sheffield Wednesday.

Replying to the kit, a fan said: “Drake? All I see is Sheffield Wednesday…”

Another suggested taking Drake “to the cleaners” for copying the badge.

“Two players in the shortlist”, #Barcelona wants to work on two positions in January